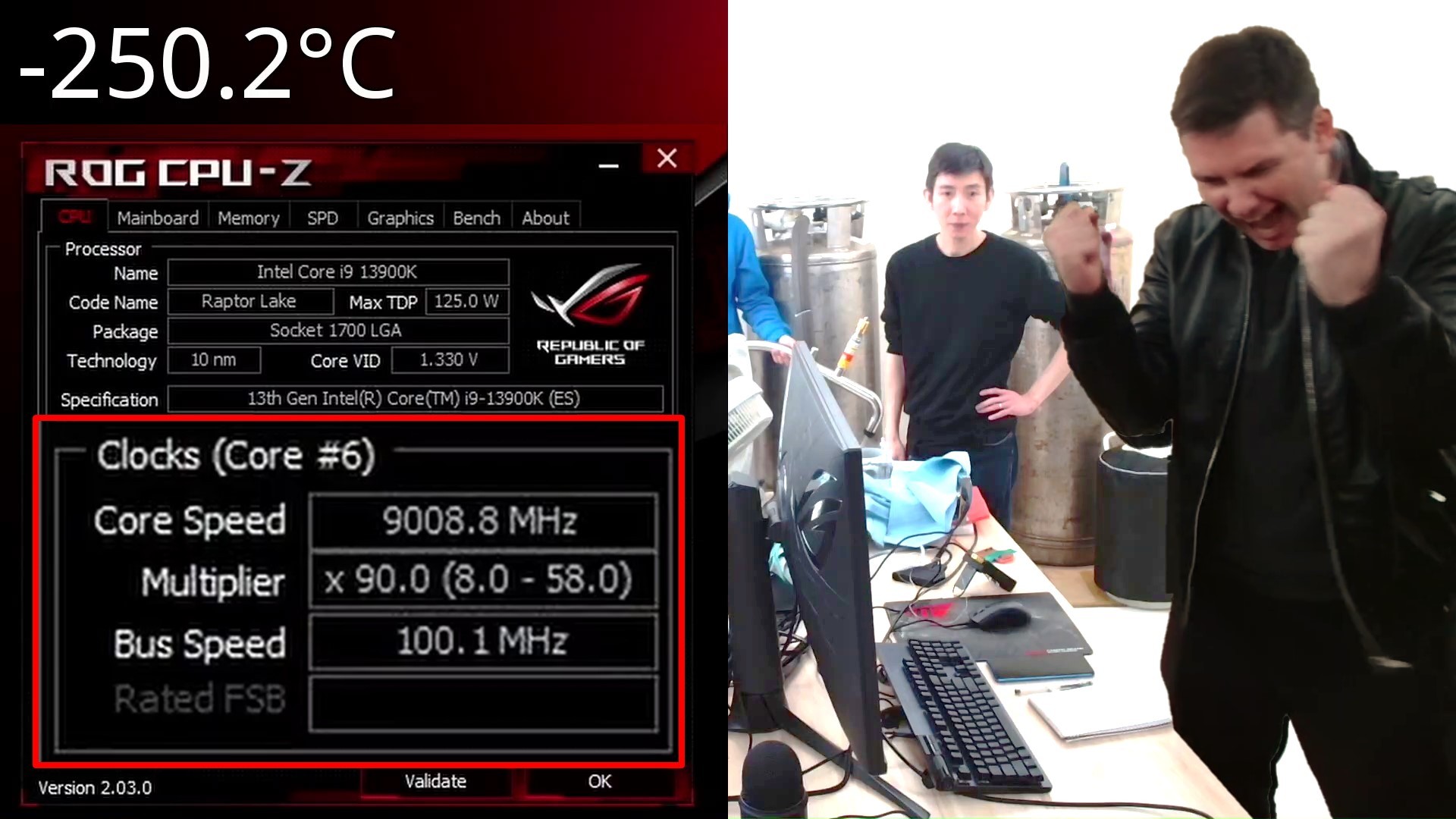 I joined Elmor and the ASUS ROG OC team for the first 9 GHz CPU Overclock with a liquid helium cooled Core i9-13900K Raptor Lake CPU. In this blog post, I want to share some behind-the-scenes clips and information on how we achieved this record.

The journey began on November 15, 2022, when I received a message from the ASUS ROG OC team that they were planning a liquid helium overclocking session in two weeks. I have previously attended ASUS OC sessions, including those where liquid helium is used, and sometimes upload videos of the extreme overclocking achievements to the YouTube channel.

Having missed the Raptor Lake OC session due to my European travels earlier this year, I was eager to make it this time. In case you missed it, Elmor broke the 10-year old CPU frequency record at the previous ASUS OC session.

The actual OC session was scheduled for the week of December 5 to 9, with the liquid helium session planned for the very last day. From December 5 onwards, the ASUS ROG OC team was busy sorting through several CPUs. They wanted to know if any chips had more potential than the Core i9-13900K record chip.

The ASUS ROG OC team for the liquid helium session consists of the usual suspects: SoonHo (Safedisk), Peter (Shamino), and Jon (Elmor). SoonHo and Jon were each manning their system to pre-test the CPUs. At the same time, Shamino helped in case any issues or interesting findings popped up.

In the meantime, I was busy setting up a Raptor Lake system with the EK-Quantum Delta2 TEC. I will share more information about that system and the overclocking results in a future video.

Along with a Raptor Lake CPU and, of course, the Maximus Z790 Apex motherboard, we also used other specific extreme overclocking tools. Obviously, there’s the usual ElmorLabs equipment which includes:

The DIY OC panel features three small buttons: two buttons to control the BCLK frequency up and down and one button to reset the system. The BCLK buttons come in handy when squeezing the last bit of frequency out of the system. Essentially, during the session, we first overclock using the CPU ratio. Then, if it’s stable, increase the frequency using the BCLK buttons.

The DIY OC button is probably my favorite thing about the whole system (after the CPU, of course!). It’s a big red button that controls the slow mode function. In short, when slow mode is enabled, the CPU is downclocked to 800 MHz. That allows you to apply the settings for the record attempt. When pressing the button, we disable slow mode, and the system works at the set frequency.

Suppose we’re successful at keeping the system running. In that case, we increase the BCLK frequency and repeat the process to give it another shot!

For the big day, Intel sent over a film crew to tape our liquid helium session. We also gave a brief interview discussing overclocking and the record attempt. I believe the video is already out, and I will leave a link in the description below. The room filled up pretty quickly with the cameras and film crew.

Liquid helium overclocking sessions are intense, so it’s crucial to plan the day well. That means setting up the systems and checking if everything is booting correctly before lunch, enjoying lunch, and getting ready for the liquid helium after lunch. Even the preparation phase can be stressful if last-minute changes have to be made to the run plan.

We usually set up the screen recording on both systems and a webcam to capture the session. I may upload the complete footage of the session sometime in the future, or it may be on the ElmorLabs YouTube channel.

Let’s go to the action.

Elmor was first up to try helium with the current 13900K record chip. First, we cool down the CPU to minus 196 degrees Celsius and do a sanity check on the frequency overclock on liquid nitrogen. When everything is ready, we get the liquid helium flowing.

Overclocking with Liquid Helium is definitely more intense than liquid nitrogen. That’s not only because it’s expensive and you have a limited quantity but also because you’re dealing with much lower temperatures. We had about 100 liters of liquid helium available, which gives us about 1 hour of run time in an ideal situation. Fortunately, this CPU is excellent with extreme temperatures and didn’t cold bug until almost -260 degrees Celsius. That’s 13 Kelvin above absolute zero!

The first run lasted about 10 minutes. While we quickly improved upon the current world record, achieving 8952 MHz, we didn’t come close to our target of 9 GHz.

After about 25 minutes, the system was beginning to have issues booting up due to the cold temperatures, and we made the decision to move on to the backup system

As Elmor switched over to the second system, we also swapped over the storage and our validation button. In the meantime, SoonHo worked to get the first system back up and running for another attempt. Our second system was ready in four minutes.

For run 2, we tried another Core i9 Raptor Lake CPU. This CPU had been pretested and is about 100 MHz worse than our record chip. So it had potential. Unfortunately, this chip was unable to cope with temperatures below -200C. So it had no chance of benefiting from the liquid helium temperatures.

After three or four attempts in 10 minutes, we decided to bring out a third backup system.

It took less than 10 minutes to prepare the third system for a liquid helium attempt. The CPU in this system was similar to the chip from the second system in frequency, but we hoped it would cope much better with the colder temperatures.

While that was the case, it still could not match the chip from our first system. In addition to the cold temperatures, the motherboard began freezing excessively. We were even having issues getting the USB keyboard to work in Windows. So after about 10 minutes, we decided to switch back to our primary system and give it another shot.

Tensions were high at this point because we had nothing to show for so far. To make matters worse, we seemed to be running low on liquid helium. The team felt that we had just one shot at this.

I now recommend you to watch the YouTube video which includes the full 9 GHz CPU overclock run. As you can see, we were all in disbelief that we made the 9 GHz happen. At the end of the day, we had 3 near-9 GHz results: one about 3 MHz short of the big 9, which didn’t even pass validation, the result that did pass, and one slightly higher, which crashed and didn’t produce a result.

Following the 9 GHz validation, SoonHo attempted to break additional world records in PiFast and SuperPI 1M using the 9 GHz CPU and whatever liquid helium was left in the tank. The CPU ran both benchmarks at 8.44 GHz with a temperature of minus 220 degrees Celsius. The results are equally pretty impressive:

Overall, this was a pretty memorable day. Not only because we broke the 9 GHz CPU overclock barrier but also how it happened. It was pretty much our last shot when it happened. Also, this is a magical CPU that’s made for liquid helium. I’ve never seen a chip that can run such low temperatures so consistently.

To end the video, I want to thank the ASUS and Intel teams for inviting me to this OC session and their continued support. See you next time!