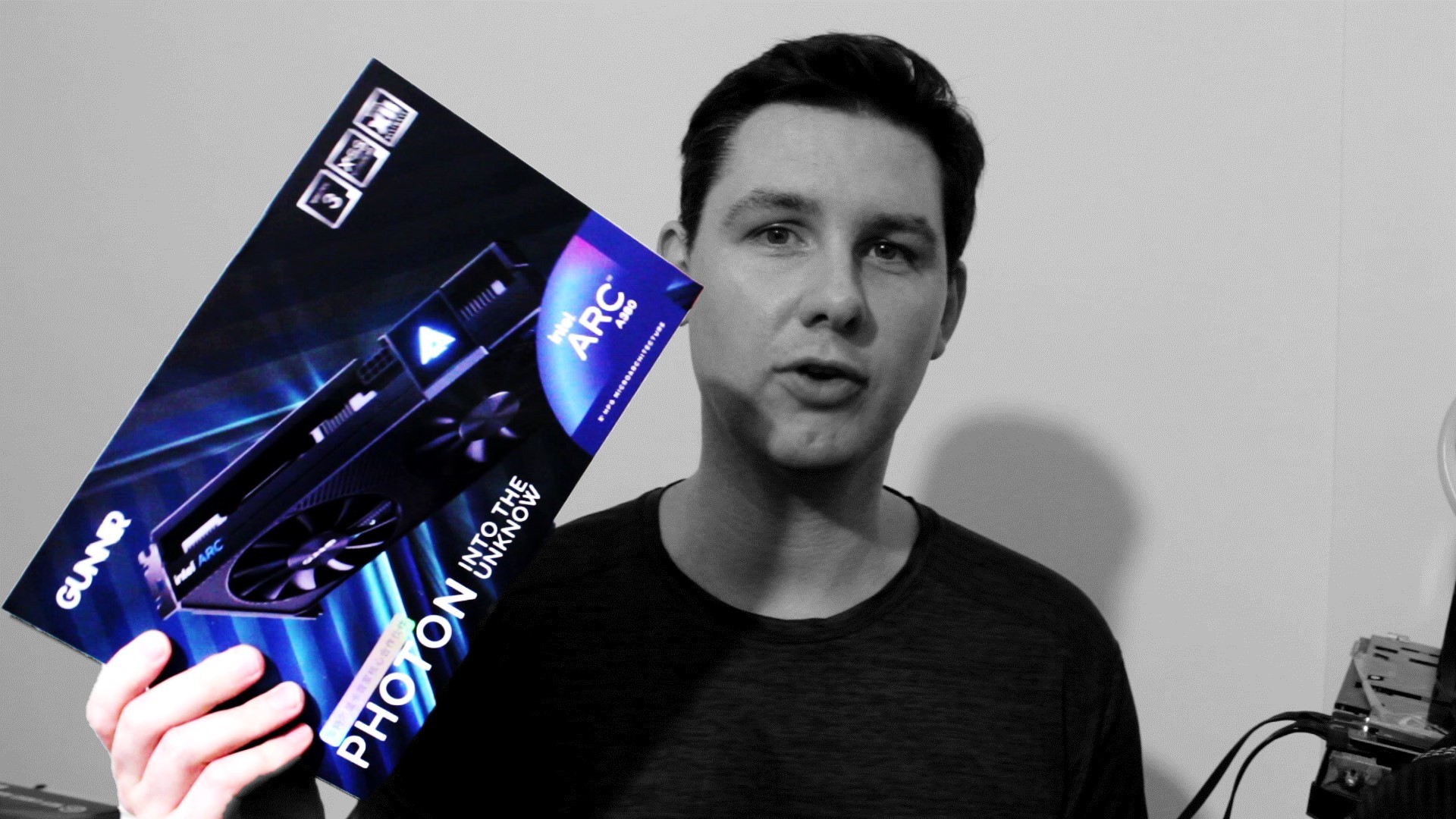 In this blog post, I update you on the progress I’ve made overclocking the Intel Arc A380 to 3.1 GHz with custom overclocking tools.

As some of you may know, I purchased one of the GUNNIR Photon Arc A380 graphics cards at the beginning of this month from JD.com. I hoped it would be a relatively quick SkatterBencher video to put out in anticipation of the next-generation CPU platforms coming later this year. Unfortunately, things were a bit more complicated than I had initially hoped. So, as you can see from my channel uploads, I’m not quite there yet.

Two weeks ago, I teased the GPU clocked to 3.1 GHz on my Twitter. So, in this video, I want to give you a quick update on what challenges exist with these cards and how far I got working around the issues.

The first issue that most A380 owners are familiar with is the limited overclocking tools available in the driver software.

As TechPowerUp points out in their review of the Gunnir A380: while GPU overclocking is available within the Arc Control software package, it’s a reasonably limited implementation:

In addition, there’s limited to zero information available from Intel on the GPU clocking or voltage topology. So, the first challenge is to determine how clocking and voltage work on this card.

In the next few minutes, I’ll review some of my findings and thoughts on the A380 topology. Please note that none of this is confirmed by Intel directly and, thus, may be wrong. So, take it for what it is.

Intel has a lot of experience building graphics engines. You find an Intel GPU inside most of the desktop and mobile processors. At first thought, you’d assume that the discrete GPU clocking works the same way as on the integrated graphics. I’ve done a few Intel IGP overclocking videos in the past, so if you want more information on that, feel free to check out SkatterBencher #28 (UHD750), SkatterBencher #33 (UHD 770), or SkatterBencher #38 (UHD 730).

The discrete GPU clocking works … in a totally different way. In fact, from what I’ve gathered, it works kind of similar to NVIDIA GPUs.

With special software tools, you can extract from the driver a voltage-frequency curve. In the driver, we find 130 distinct V/F points defined, ranging from 300 MHz to 2450 MHz explicitly stated. That said, from testing, it appears the curve extends beyond 2450 MHz. Each V/F point has a frequency and voltage associated with it. The GPU can select the optimal V/F point depending on the current situation.

In offset mode, you can offset the factory-fused voltage-frequency curve by a specific frequency or voltage. The behavior is similar to NVIDIA graphics cards in that increasing the voltage offset also increases the maximum operating frequency.

On NVIDIA graphics cards, the reliability voltage, Vrel, defines the maximum warranted voltage. The maximum voltage, Vmax, is the highest voltage that AIB partners can enable on their products. On NVIDIA cards, a percentage slider enables the range beyond Vrel up to Vmax.

Similarly, on the A380, increasing the offset moves you up along the factory-fused voltage-frequency curve. It gives you access to V/F points with higher voltage and frequency.

In lock mode, you can override the highest available V/F point within the warranted range. In this case, 2450 MHz, with a manual voltage and frequency.

With the help of Shamino, and after many troubleshooting attempts, we built a custom tool that allowed us to try out both methods. For the time being, I won’t share the tool publicly yet for two reasons:

With the overclocking tool problem solved, one would expect the rest goes smoothly. Just push it to the max. Well, not so quick. While the tool we built provides us with the frequency and voltage control we need to push the card to the limit, there are still some limitations.

The first limitation is the power limit. The power limit definition for the Intel discrete GPUs is very similar to the architecture on the CPU side. There’s a PL1, PL2, and PL4.

PL1 is the long-term sustained power limit, PL2 is the short-term burst power limit, and PL4 is the peak power limit. These three power definitions have associated throttle mechanisms that trigger when the limit is surpassed.

The GPU has other throttle mechanisms related to temperature and power supply stability, but these are not relevant now.

PL1 and PL2 are set to 65W by default and can be increased to 97.5W via the driver interface. With specialized tools, you can increase these values to well over 250W, if needed.

PL4 is set to 800W by default and cannot be increased, even with specialized tools. Unfortunately, it’s the PL4 limit that is the blocking limit that’s preventing me from finishing the SkatterBencher video.

I’ve tried many things to resolve the PL4 limit, but unfortunately, I’ve yet to come up with a viable solution. To give you some ideas about the thought process, here’s how I’ve approached the problem.

We actually know a lot about the Intel power limits from the CPU side of their business. Therefore, we know that PL4 is the ultimate safeguard against power spikes and is a limit that shall not be exceeded. What we don’t know is how it is implemented on discrete GPUs.

There are several options:

The first option can be evaluated by checking the physical PCB for any shunt resistors or additional ICs. There is none present. That makes sense because it would add substantial cost to the PCB.

To make a long story short, it was relatively straightforward to set up the PMBus communication and get the voltage controller functions to work. While the controller definitely supports functions to feedback information, it doesn’t seem like there’s any information relayed from the controller back to the GPU. So, the second option is also off the table.

As it would take quite a lot of time to go through how the third option works on low-end NVIDIA graphics cards, I will refer you to SkatterBencher #40, where I took the time to explain it in detail. The long story short is that we cut the communication line between the GPU and the voltage controller. As a result, we can force the GPU to boot at a low voltage (usually around 0.6V) and manually adjust the output voltage via the voltage controller by manipulating the feedback circuit.

And here’s where my progress grinds to a halt as I’ve simply been unable to work out how to make this work. There are two parts of this challenge that needs to be addressed:

I currently have no answers for either question, so, as I said, my progress has ground to a halt.

So, what are the next steps? Well, there’s still a couple.

Ideally, I would find a way to override the PL4 limit using a software tool. Some tools can override PL4, but I only have access to tools that can only lower the limit for now.

If that doesn’t work, I can continue to work on the voltage hardware modification method. However, I will need to look for expert assistance to make progress.

A far-out alternative is VBIOS modding. While I did manage to make a dump of the BIOS, I have minimal experience with this. Also, the BIOS would likely need a valid digital signature, just like with NVIDIA and AMD graphics cards.

Suppose, somehow, I manage to get around the PL4 throttling problem. In that case, the next step will undoubtedly be to find a solution for the overheating 2-phase VRM. Quick tests showed me that the VRM hits over 90 degrees in 3D load even with low voltages. One option is to get ahold of the Bykski full-cover water block for this graphics card and liquid cool the VRM.

So, as you can see, I’m not yet out of options, but I’m not expecting to sort out this SkatterBencher content any time soon.

Anyway, that’s all for today! If I somehow get it working, I’ll be sure to put out a video providing more details. If not, the next video I’ll put up will probably be a CPU overclocking guide.

I’d like to thank my Patreon supporters for supporting my work.

As per usual, if you have any questions or comments, feel free to drop them in the comment section below.

See you next time!