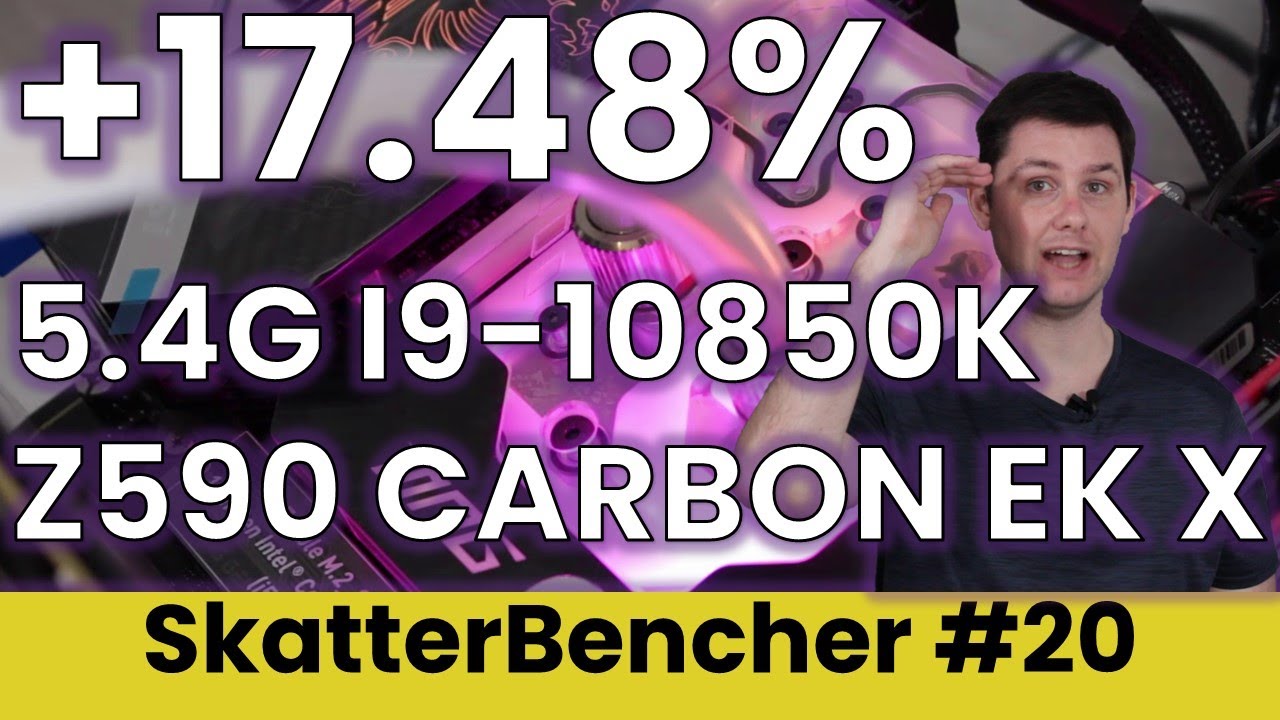 The Z590 Carbon EK X is the successor of the Z490 Carbon EK X and was announced during the EK CES Expo 2021 just a couple of days ago. The Carbon EK X bundles an improved EK monoblock with flow indicator, a leak tester, and an MSI motherboard featuring revamped looks and an upgraded VRM solution.

The Core i9 10850K is the little brother of the flagship Core i9-10900K which we overclocked twice before already. It is also based on the Comet Lake architecture and was launched around the end of July, two months after the launch of the 10900K.

In this video we will cover the basic overclocking steps to get your CPU all the way to 5.4 GHz using custom loop water cooling.

We will dig into three overclocking scenarios.

First, we will unlock all the power limits by enabling the Carbon EK X water cooling mode

Lastly, we’ll do some manual finetuning to squeeze the last bit of performance out of our CPU.

Before we get going, we need to talk a little bit about the overclocking constraints and our platform.

Along with the Intel Core i9-10850K processor and the EK-Quantum MSI MPG Z590 Carbon EK X motherboard, in this guide we will be using an NVIDIA RTX 2080 Ti, a pair of G.SKILL Trident Z DDR4-4266 memory sticks, a Seasonic Prime 850W Platinum power supply, the Elmorlabs P80DB2 LPC Debug Card, and of course EK-Quantum water cooling.

All this is mounted on top of our favorite Open Benchtable.

The cost of the components should be around $3,240

With all this in mind, let’s jump into the benchmarks and overclocking.

Before we get started with pushing the performance of the Intel Core i9-10850K processor, let’s first take a look at the scoring at stock settings:

Water Cooling Mode is a single BIOS option that allows you to unlock all the Turbo Boost 2.0 power limits constraining your CPU’s performance.

The long story short is that Turbo Boost 2.0 allows the processor to increase the power consumption temporarily above the TDP rating to achieve higher performance. It manages this by accumulating “energy budget” during periods of idle time that can be deployed when necessary during periods of high load.

We discussed the Intel Turbo Boost 2.0 Technology at length in a previous video titled “BIOS Explained: Core i9-10900K Overclocked to 6G with Intel Cryo”. While we use a different CPU, the principles demonstrated in that video also apply to our configuration.

By unlocking all the power limits, we effectively tell the CPU to run at the highest possible turbo boost settings all the time.

XMP stands for Extreme Memory Profile. It allows memory vendors such as Gskill to program higher performance settings onto the memory sticks. If the motherboard supports XMP, then you can enable the higher performance with a single BIOS setting. So it saves you from lots of manual configuration.

The performance uplift is most notable in multi-threaded benchmark applications which would typically be heavily constraint by the default power limits.

Anyway, let’s do some overclocking

MSI offers an easy way to overclock the CPU through ratio offsets. This feature lifts all turbo ratios up from the default configuration by a specified amount.

Regular viewers will know that we also used this overclocking technique in our Core i7-10700K video which coincidentally also featured a Carbon EK X motherboard.

Before we check the performance uplift I want to make two notes.

First, setting the turbo ratio offset uses the default method of applying turbo ratios, meaning the frequency is determined by how many cores are active.

Also we are not setting a negative offset when running AVX, meaning the CPU will not further reduce the frequency with AVX instructions are used by the software.

Second, we choose Adaptive Voltage Mode for the same reasons why we chose it when overclocking the Core i9-10900K with Cryo cooling.

The factory set vf curve of this Core i9-10850K is defined from 8x ratio up to 52x ratio as 52x is the highest default turbo ratio available on this CPU. For any ratios higher than 52x the CPU will set the same voltage as for 52x.

By setting Adaptive Voltage to 1.4V we lift the voltage for ratios of 52X and up. This is particularly necessary to ensure stability at the highest ratio we have set: 54X for up to 2 cores. It will also be applied when 3 cores are running at 52X. However, for the other configurations, from 4 cores at 51x to 10 cores at 50x, the default vf curve will be followed.

Let’s do some finetuning

For most of our guides, in the last overclocking scenario we always find a couple of ways to further increase the CPU frequency. While this 10850K processor can run at 5.5GHz or even sometimes 5.6 GHz, we found there’s not much we can do to ensure stability at those frequencies. Even with increased voltage. So, basically, the turbo +2 ratio offset very effectively maxed out our CPU.

However, that won’t stop us trying to squeeze out more performance. There are two things we can still tune.

First, we will increase the ring interconnect frequency. Then, we will also try some memory tuning.

Before we move on to the performance numbers, let’s discuss the ring ratio and memory try it.

The CPU ring is the interconnect on the CPU die which connects all parts of the CPU exchange data. It connects not only the CPU cores, but also the integrated graphics as well as the system agent. Via this interconnect the CPU cores can bring in fresh data to use for calculations as well as send data to other parts.

By overclocking we increase the potential data throughput of this ring in an attempt to increase performance. The Ring shares the voltage rail with the CPU Core, meaning we don’t need to set a separate voltage to increase the ring frequency. We can just increase it until it reaches the maximum stability.

Memory Try It! is a memory overclocking feature unique to MSI and has been on MSI motherboards since the Z97 platform launched in May 2014 together with the Haswell refresh processors. It aims to provide a step up from XMP when it comes to overclocking the system memory and offers an incredible range of overclocking profiles tuned for all popular memory chips on the market.

The way to use it is very simple. Simply select one of the profiles, save the settings and try stability tests.

The easiest way to ensure memory overclocking stability is by using the MemTest software. Even with the free version you can open multiple instances of the software and allocate all the available memory to the software.

Once you have determined the memory is stable, you can move to the next profile in Memory Try It!

Do note that the Memory Try It! function will also adjust voltages if necessary. For example, it will adjust the system memory voltage as well as the CPU System Agent voltage. Make sure to verify the settings and ensure you are comfortable with the raised voltages.

In our case, our memory is out of the box overclocked to DDR4-4266 with Cas latency 19. While we were able to improve the memory configuration with memory try it to DDR4-4533 CL18, and run most of the benchmarks, this was not a fully stable system when testing with MemTest.

So in the end we had to settle for DDR4-4266 CL17. This is the same frequency as our XMP but with slightly better memory timings.

We re-ran the benchmarks and checked the performance increase compared to stock operation.

This Prime 95 result is by far the most impressive result of all my testing with the Core i9-10850K and the Z590 Carbon EK X, and clearly demonstrates the impact of the improved VRM and cooling compared to its Z490 predecessor.

Comparing the maximum stable Prime 95 results from our videos with the Z490 Carbon EK X and the Z590 Carbon EK X, we find the following:

What we see is that while the package power increased from 277W with the 8 core 10700K at 5 GHz to 355W with the 10 core 10850K at 5 GHz, the CPU and VRM temperatures are pretty much the same. That’s a very impressive achievement which can probably be credited to the improved VRM design and components as well as the continued joint development efforts of the EK and MSI engineering teams.

Overall I very much enjoyed overclocking this Core i9-10850K processor. It doesn’t feel that different from its bigger brother the 10900K and in the end we can achieve very similar overclocking results. Up to 5.4 GHz with two cores and 5 GHz with all 10 cores running Prime 95 small FFT with AVX enabled.

While I enjoyed the easy way of overclocking using the Turbo Ratio Offset, I found it a bit of a pity that I couldn’t further tune the frequency up with manual overclocking. I think 5.5 GHz would have been possible with at least one core if I’d been able to set the adaptive voltage to 1.5V. However, due to the way adaptive voltage mode works, that would impact the overclock of the other cores a bit too much.

I was the most impressed by the final test result: Prime 95 Small FFT with AVX at 5 GHz. Running a sustained 355W load with high yet stable temperatures and without any errors is just amazing. The upgraded VRM of the Z590 Carbon EK X compared to the Z490 Carbon EK X certainly did not disappoint.

When it comes to aesthetics I’m hardly the right person to tell you whether this is an appeals to you. I think the EK monoblock and MSI board design style match quite well and the new flow indicator certainly adds a new dimension to the Carbon EK X.

That’s all for this video. I hope to revisit the Z590 motherboards with Intel’s next-generation Rocket Lake processor soon.

Until then, If you have any questions or comments, feel free to drop them in the comment section below.

See you next time!