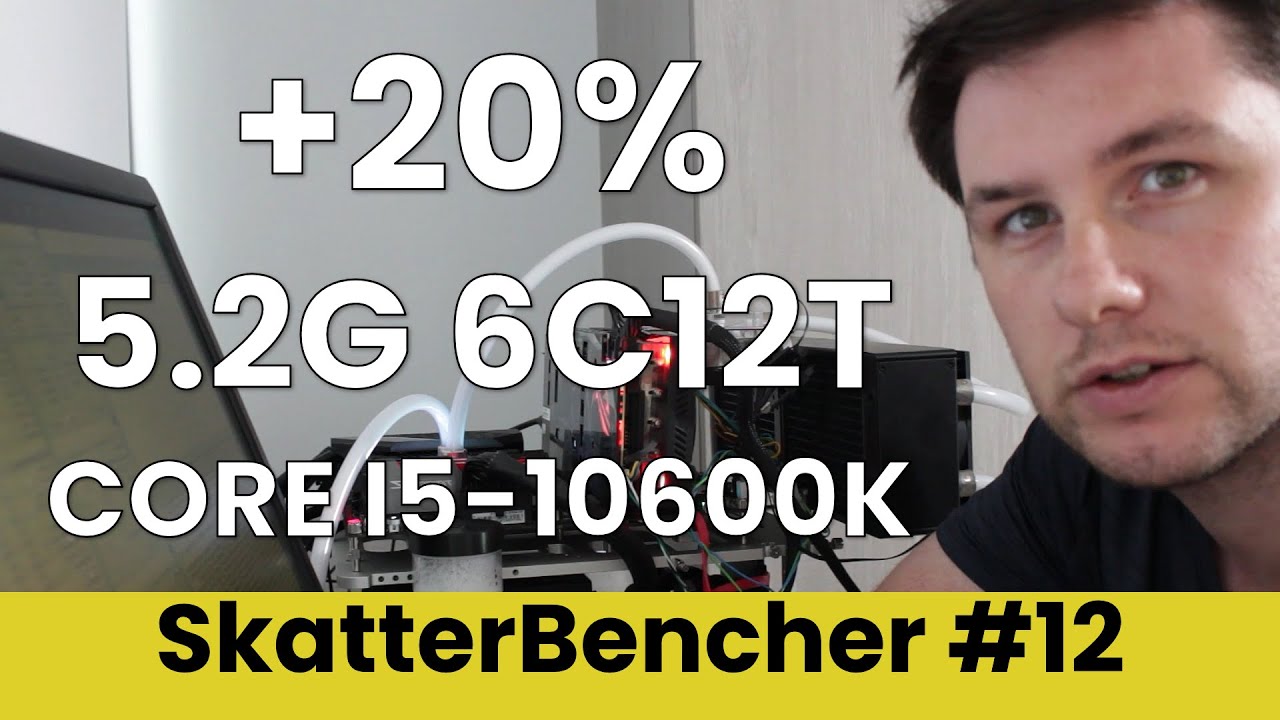 We overclock the Intel Core i5-10600K processor up to 5200 MHz with the ASUS ROG Maximus XII Hero motherboard and EK water cooling.

The 10600K was launched together with the other Comet Lake parts and should be on the shelves already.

In this video we will cover the basic overclocking steps to get your CPU all the way to 5.2 GHz using custom loop water cooling

Along with the Intel Core i5-10600K processor, in this guide we will be using the ASUS ROG Maximus XII Hero motherboard, an ROG Strix RTX 2080 Ti, a pair of G.SKILL Trident Z DDR4-4266 memory sticks, and of course EK water cooling. All this is mounted on top of our favorite Open Benchtable.

The cost of the components should be around $3,000

Before we get started with pushing the performance of the Intel Core i5-10600K processor, let’s first take a look at the scoring at stock settings:

The first step is definitely the most easiest: Clear the BIOS and press F3 to unlock power limits for increased performance.

Now, let’s move on to the ASUS AI overclocking

ASUS AI Overclocking is a genuinely novel approach to automatic overclocking. Rather than using a brute force approach with pre-set frequency and voltage, AI OC uses an algorithm to predict the optimal performance settings.

The algorithm monitors system workload, the temperatures, fan speed and power draw to assess the quality of your CPU and cooling solution. Based on these inputs, it then adjusts the frequency real-time to ensure a stable overclock.

Before you enable AI OC, you must enter the Operating System and run your preferred high-load workload for 10 to 30 minutes. Then reboot.

In the BIOS, navigate to the AI OC Guide submenu or press F11. Read through the quick guide to get more familiar with the automatic overclocking procedures. If you’re ready press Enable AI

Save the settings, and exit the BIOS.

Upon entering the BIOS, navigate to the Extreme Tweaker menu.

Then save the changes and reboot.

First, I have to address the elephant in the room. Why would anyone buy 600 dollars of custom loop water cooling to cool a mid-range Core i5 CPU? Especially considering even a highly overclocked 5.2GHz 10600K barely breaks 220W CPU package power. Even a $90 tower air cooler like the Bequiet DARK ROCK PRO 4 will handle up to 250W!

And to those people I’d say: you are right!

From a functional perspective, meaning cooling down the CPU, there’s no need to buy custom loop water cooling.

However, some people seem to appreciate the custom loop aesthetics and for those people there are cheaper options available. For example, the EK Classic KIT D-RGB S240 starts at 260 dollar. Or you can go to an even more low end brand like Bykski or Barrow and put together your $150 dollar loop.

In the end it’s not just about the cooling but also about how you want your system to look.

Moving on to the overclocking.

Frankly, I was a bit disappointed to see the overclocking result. With 4 fewer cores than the 10900K, the 10600K should have more head room right? Well, it seems like Intel did a pretty good job sorting the good silicon from the average and put all the good stuff in the Core i9s. I can’t say I’m pissed off about, I mean, it just makes good business sense.

Overall, overclocking the Core i5-10600K is very easy and you’ll get an easy 15 to 20 percent performance gain without having to worry too much about the temperatures. What’s not to like?

That’s all for today. If you have any questions or comments, feel free to drop them in the comment section below. If you liked the video, you know what to do.

See ya next time!