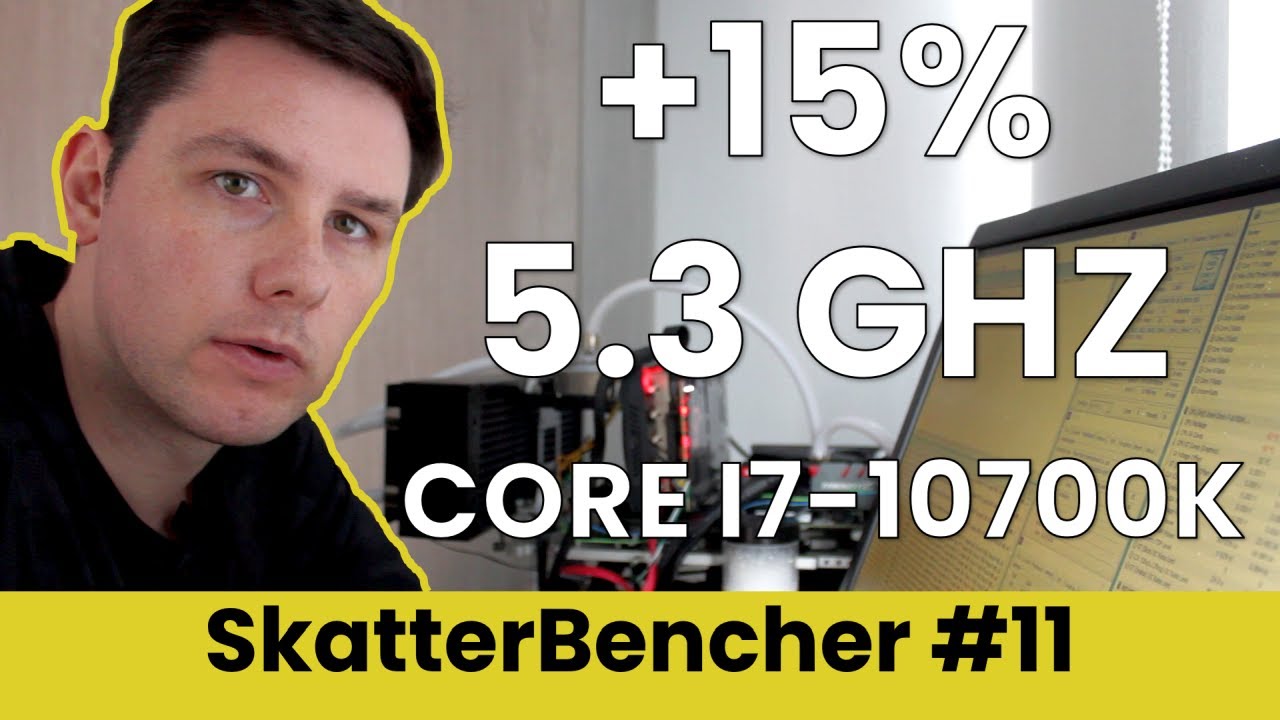 Yes I know … it’s quite unbelievable we have two videos up in less than two weeks. Let’s hope we don’t run out of steam.

In this episode of SkatterBencher we have a look at the Core i7-10700K processor and the EK-Quantum MPG Z490 Carbon EK X motherboard.

The Core i7-10700K is just like it’s bigger brother the 10900K based on the new Intel Comet Lake architecture. Unlike its bigger brother, the i7-10700K only sports 8 cores and 16 threads. That makes it a direct replacement of the i9 9900K Coffee Lake.

With a base frequency of 3.8 GHz it’s clocked 100MHz higher than the 10900K. The Turbo Boost frequencies are 100 MHz lower than the 10900K, clocking at 4.7GHz for all cores and up to 5.1 GHz for 2 cores. Sadly, it does not have the Thermal Velocity Boost feature as that’s exclusive for the Core i9.

The 10700K was launched together with the other Comet Lake parts and should be on the shelves already today for slightly less than 400 dollar.

The EK-Quantum MPG Z490 Carbon EK X motherboard is a collaboration between EK and MSI to bring water cooling motherboards to a much more affordable price point. The bundle consists of an EK-Quantum Momentum monoblock and the MSI MPG Z490 Gaming Carbon WiFi motherboard.

MSI’s MPG portfolio fits in between their high-end MEG and low-end MAG product lines. At about 399 us dollar, the Carbon EK X matches the price point of the MSI MEG Z490 ACE.

In this video we will cover the basic overclocking steps to get your CPU all the way to 5.3 GHz using custom loop water cooling

Along with the Intel Core i7-10700K processor, in this guide we will be using the EK-Quantum MPG Z490 Carbon EK X D-RGB motherboard, a pair of G.SKILL Trident Z DDR4-4266 memory sticks, and of course EK water cooling. All this is mounted on top of our favorite Open Benchtable.

Last but not least, we also threw in an RTX 2080 Ti for good measure.

The cost of the components should be around $2,900

Before we get started with pushing the performance of the Intel Core i7-10700K processor, let’s first take a look at the scoring at stock settings:

The first step is definitely the most easiest: enable MSI Game Boost.

MSI Game Boost enables one-second overclocking, giving you an easy performance boost in no time. Game Boost does two things: first, it overclocks the CPU by exactly 1 ratio – so +100MHz. Second, it also enables XMP memory. In order to support the higher CPU frequency, it also bumps up the CPU Core Voltage to 1.35V.

To enable Game Boost, simple click on the two big buttons near the top left in your BIOS. Once they light up, you’ve enabled game boost. Simply save the settings and exit the BIOS.

Once you have entered the BIOS, you’ll notice that the CPU frequency is bumped to 4.8GHz for all 10 core boost. The ring ratio is still clocked at 4.3 GHz.

Now, let’s move on to the Manual +2 Turbo

Building on what we learned from the MSI Game Boost, we take our first manual overclocking steps.

In the BIOS, navigate to Advanced mode and then enter the OC menu.

Save the settings, and exit the BIOS.

Keeping it simple, let’s enter the BIOS again and switch to Advanced Mode. Then enter the OC menu

There’s two things I want to talk about in last couple of minutes.

First, what’s the right overclocking strategy? I’d say the easiest way is to set the CPU Core voltage to 1.35V and increase the CPU frequency using the Turbo Ratio Offset mode. This will give you a good initial indication of the quality of your CPU. Then, based on how far you can push it play with the CPU vcore to either increase stability or reduce the temperature. From our experience, the limiting factor will definitely be the CPU temperature.

Second, the performance gains are pretty interesting. Finding the approximate maximum overclocking capability of your CPU shouldn’t take more than an hour and getting a free 15-20% performance boost in return is very nice.

That’s all for today. If you have any questions or comments, feel free to drop them in the comment section below. If you liked the video, you know what to do.

See ya next time!