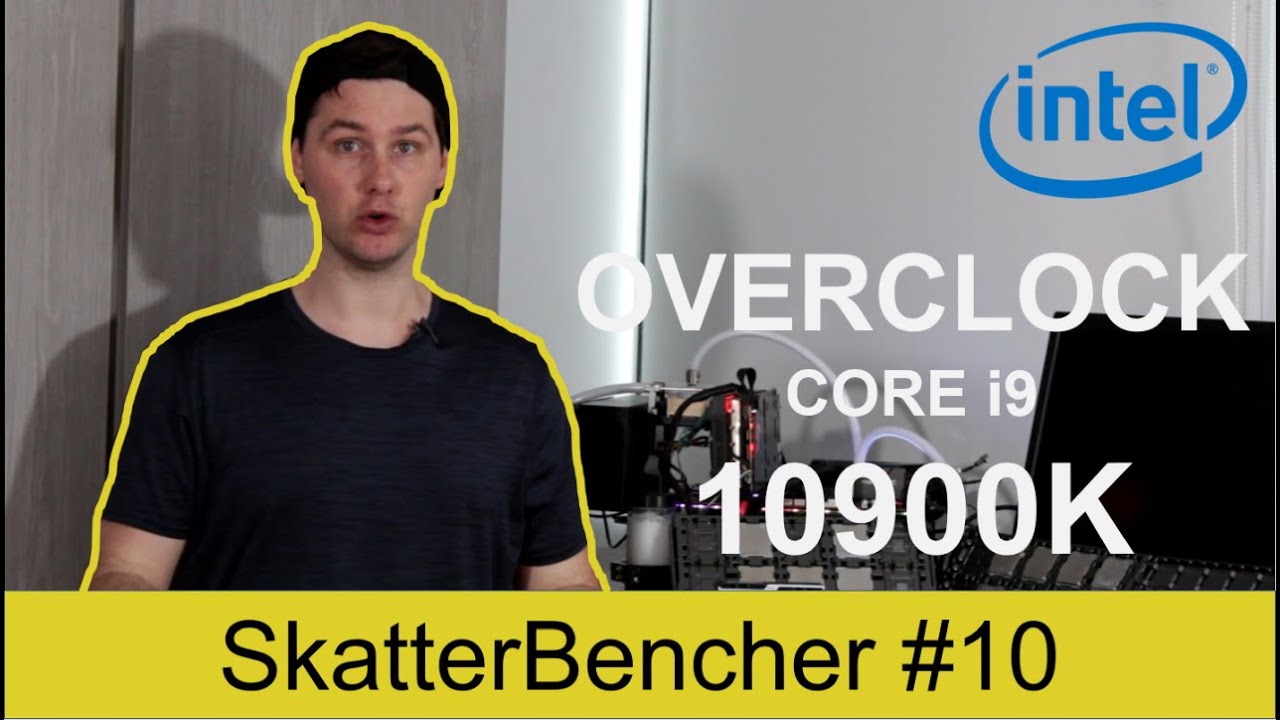 We overclock the Intel Core i9-10900K processor up to 5.4 GHz with the ASUS ROG Maximus XII Extreme motherboard and EK water cooling.

The tenth episode of our Skatterbencher series is dedicated to overclocking Intel’s 10th generation Core CPUs. More specifically, today we’re having a look at the Core i9-10900K processor.

The Core i9-10900K was announced on April 30th and will be available in the stores around the time this video goes up.

This is Intel’s first 10 core CPU on a mainstream platform and comes with an entirely new Z490 chipset. While the architecture carries a new name – Comet Lake – it is pretty much identical to its Coffee Lake predecessor. In terms of specifications, as mentioned before the 10900K is a 10-core CPU with a base frequency of 3.7GHz, an all core turbo frequency of 4.8GHz, and a Thermal Velocity Boost frequency of 5.3GHz for single core.

The Thermal Velocity Boost technology essentially allows for an additional 100MHz in case the CPU is running within a pre-defined thermal and power window.

Most remarkably the CPU is listed at a recommended price of around 488 us dollar.

In this video we will cover the basic overclocking steps to get your CPU all the way to 5.4 GHz using water cooling.

First, we will simply unlock the power limits in the BIOS. Second, we’ll use Asus’ AI overclocking feature. Lastly, we’ll go for some manual overclocking attempts.

Before we dive into overclocking the 10th generation 10900K, let’s have a quick look at the progression Intel has made with their 14nm process technology.

All the way back in 2015, Intel launched the Core i7-5775C Broadwell CPU as the successor to Haswell. This was their first 14nm desktop CPU and came in the form of a 4 core processor with hyperthreading clocked at 3.3GHz base and max turbo of 3.7GHz frequency. An overclocked and water cooled CPU would achieve a Cinebench R15 score of about 1,000 points.

That’s triple the performance in 5 years, or an average growth in performance every year by 25%. That’s pretty damn impressive engineering work!

Along with the Intel Core i9-10900K processor, in this guide we will be using the ASUS ROG Maximus XII Extreme motherboard, a set of G.SKILL Trident Z DDR4-4266 memory, and of course EK water cooling. All this is mounted on top of our favorite Open Benchtable

The Maximus XII Extreme motherboard is the top board in Asus Z490 line up and sports a 16 power stage VRM as well as a very beefy VRM heatsink solution. This will come in handy as you’ll later find out.

The EK Water Cooling kit consists of the EK-Quantum Magnitude CPU water block and the CoolStream PE360 radiator from an EK-KIT X360.

Last but not least, we also threw in an ASUS ROG Strix RTX 2080 Ti for good measure.

The cost of the components will be around $3500

Before we get started with pushing the performance of the Intel Core i9-10900K processor, let’s first take a look at the scoring at stock settings:

The first step we’ll take is to unlock the power limitations in the BIOS. To get to the BIOS, hold delete as you’re booting up your system.

From the main menu, navigate to the Advanced tab and click on CPU Configuration.

Then scroll all the way down to Internal CPU Power Management and enter the sub menu.

Then press F10, save and quit.

In the operating system you’ll find that mostly the frequencies seem unchanged. However, when running benchmarks and workloads, the performance will has slightly improved due to longer and higher peak turbo frequencies.

Now, let’s move on to the ASUS AI Overclocking

For many years board vendors have tried to implement automatic overclocking features in their bios for simpler performance enhancement. This has always been a mixed bag as most of the preset OC profiles are overly optimistic in frequency target or overly generous with the voltage selection. So often you’d end up with a slightly unstable or overheating system.

Asus’ AI overclocking uses a different strategy. Instead of working with preset profiles, the system will monitor the CPU and cooling system throughout an initial phase of testing, then based on its findings predict the optimal settings. The system will then automatically guide the overclocking process and adjust voltages and frequency to match your cooling system.

The better your cooling, the higher your AI overclock.

There are three steps to enabling AI overclocking. First, reset the BIOS to default settings. Then, reboot and enter the operating system. Run a heavy workload such as Prime95, Realbench or Intel XTU for 10 to 30 minutes. Then Return to the BIOS and enter the AI OC Guide menu from the top. Make sure to read through the explanation and when ready simply click Enable AI.

Press F10, save settings and reboot.

There are two main ways how you can manual configure your overclock. The first method is more traditional as you sync all the cores to a specific frequency. The second method is by configuring the turbo per core usage.

Before we get into the manual overclocking, please note that our system is cooled by very high-end custom loop water cooling and your results with AIO or other lesser forms of cooling may vary.

To determine the manual OC settings, I first rely on the information provided by the AI OC in the Prediction sidebar in the BIOS. Here you will find the target frequency and voltages for your specific system. I use those as indicators and configure the manual overclock similarly. Of course, a lot of manual testing is required to ensure full system stability.

The first method is the most simplest. Simply enter the BIOS, jump to the Extreme Tweaker menu. Then:

If you’re running custom loop water cooling make sure to also Disable the Wait for ‘F1’ If error message. This message will pop up in case no fan is attached to the primary CPU Fan header on the motherboard.

Then press F10, save settings, and reboot.

The second method is pretty much the same. The key difference is

Looking at the percentage gains after overclocking, we must come to the conclusion that overclocking the Core i9-10900K doesn’t really give us an incredible boost in performance.

In single threaded applications, the default configuration is pretty much maxed out! The thermal velocity boost of 5.3GHz is about 100 to 200 MHz lower than what we can squeeze out with manual overclocking.

The all core overclocking capabilities can be stretched further likely due to the excellent cooling solution. We gain another 400 MHz for all core non-AVX applications and reach up to 5.3GHz stable.

However, the most impressive to me was the 5.1GHz stable AVX2 overclock. The CPU Package Power as measure with HWINO peaks at 382W. That’s over 300 amps at 1.2 volt. With a max temperature of below 98 degrees after 1 hour of Prime 95, that is very impressive.

Credit is due not only to the CPU, but most definitely also the motherboard VRM. While previous generations of motherboards have struggled in worst-case scenarios, the VRM remained below 80 degrees centigrade with no active fan cooling.

That’s all for now folks. Thanks for joining is for the tenth SkatterBencher episode. I hope you learned a trick or two and until the next time!