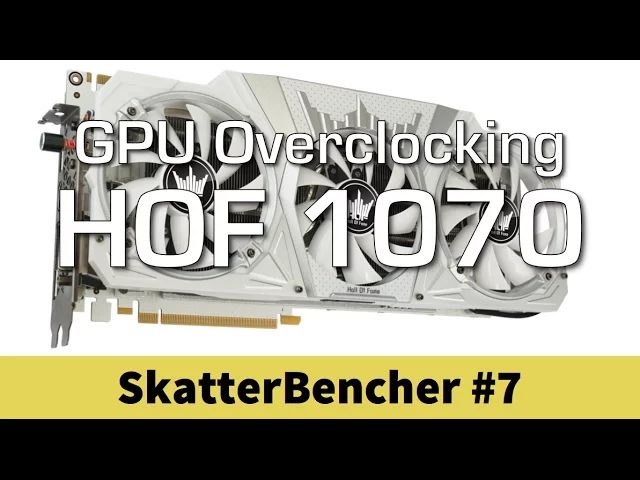 Welcome to the latest edition of the SkatterBencher series. In episode #7 we are once again focusing our attention on Graphics Card overclocking, this time pushing as much performance as possible from the latest Nvidia GTX 1070 card. In fact we managed to get hold of a GALAX GeForce GTX 1070 Hall of Fame graphics card, a card that comes complete with a substantial cooler that should offer plenty of Overclocking headroom. The plan today is to run the GTX 1080 through a variety of 3DMark tests, these include 3DMark Time Spy (DX12) followed by 3DMark Fire Strike (DX11), then 3DMark Cloud Gate (DX10) and final the 3DMark Ice Storm (DX9) test.

Firstly let’s look at the hardware we pushed in this guide:

In this stage of our testing we used the same methodology that we used in our GeForce GT 710 episode. Using the GPU-Z software utility we could not only see the actual frequencies of both the GPU and graphics memory, but also use the built-in Render Test as an initial workload to ramp up the frequencies so we can see what is really happening under the hood during full load. In this way we were able to find the upper stability threshold for the card at stock settings.

Under full load we could see that the GPU-Z utility reported that the GPU actually boosts up to a maximum frequency of 2,000MHz.

To establish a baseline score for the GTX 1070 HoF card at default settings we ran the 3DMark Time Spy benchmark. The baseline score established at the end of the Time Spy run was 6,264 marks (graphics score of 6,186 marks).

At this point we also attempted to validate the score online to make sure the run was valid and verified. After this we also submitted the score to HWBOT where it was attached to our profile. We also added additional information about the system and the cooling used to achieve the score. Once complete we then compared the score with others using the same hardware in the 3DMark Time Spy benchmark.

To start improving our score, we began by overclocking the GPU of the card. First we opened both the Xtreme Tuner Plus utility from GALAX and GPU-Z. The GPU-Z Render Test again served as our initial workload, allowing us to test fundamental stability. Once the render has begun we then opened the ‘Sensors’ tab in GPU-Z and configured sensors so that GPU Core Clock and GPU Memory Clock showed ‘Highest Reading’. Again we could see that default settings for the card were confirmed to be 2,000MHz for both GPU and graphics memory.

Using the Xtreme Tuner Plus utility we began overclocking the GPU. First we increased the GPU CLCK Offset by +50 while also checking to see if the Render Test failed. We kept going by raising the offset in increments of 25MHz. Note that although we raised the GPU Clock to +50MHz, the readings from the GPU indicated that clock speeds were in fact raised by only 37%.

By continuing to adjust and increase the GPU Clock we found that by increasing the GPU CLCK Offset to +175MHz we could raise the GPU frequency to 2,164MHz, an increase of +8.4%. At this frequency the system appeared to remain stable with no issues affecting the Render Test. However as we attempted to push the Offset parameter to +200MHz we found the Render Test locked up and the video signal was momentarily lost – clear indications that the GPU was not stable at this frequency. We seemed to have found our upper limit.

We now reset the system back to stock settings. First, we opened GPU-Z again and opened the Render Test to verify that we have indeed returned to stock settings. Having confirmed this, we could now focus on Overclocking the graphics memory.

We eventually reached an Offset of 450MHz which resulted in a graphics memory frequency of 2,227MHz. At this frequency everything seemed to be running quite stable. Attempting a 550MHz Offset results in an immediate system lockup which crashes the Render Test. Having found the upper limits of graphics memory frequency to be around +500MHz Offset, we again load system default settings, reboot and attempt some benchmark runs.

Having rebooted our system we now boosted our graphics memory clock to a more conservative 400MHz+ Offset configuration (2,200MHz). After running the Time Spy benchmark again with overclocked graphics memory we found our score had improved from 6,264 marks to 6,422 marks. We then checked and validated the score and submitted it to HWBOT where we found that we had moved up the rankings from 41st place to 32nd place.

We then increased the graphics memory frequency to a 450MHZ Offset (2,225MHz) and ran the benchmark again. At the end of a 3DMark Time Spy run we found that our score had improved to hit 6,431 marks. After validation and HWBOT submission, we found that we were now ranked 31st place for a GTX 1070 card in the Time Spy benchmark.

At an Offset of 500MHz (2,500MHz), the maximum stable frequency Offset, found that we could hit a top score of 6,461 marks, and a HWBOT hardware ranking of 30th place.

Having rebooted re-entered the OS at stock settings we now opened GPU-Z, this time also configuring both GPU Core Clock and GPU Temperature to show highest readings. We then set the Power Target (%) and Temperature (Celsius) to their highest parameters in the XTP utility. This configuration will allow us to assess if the GPU temperature was too high during the benchmark workload.

Increasing the GPU frequency further resulted in graphical glitches and artifacts appearing in the Time Spy benchmark, a clear indication of system instability. It appears that a GPU clock of 2,113MHz is the upper limit for GPU overclocking with the Time Spy benchmark. Let’s take a look at combining both GPU and graphics memory overclocks.

Now we attempted the final phase of our Overclocking journey by pushing both the GPU and the graphics memory together. Bearing in mind that these two can affect each other, it’s wise to pull back both overclocks a notch as we begin. Thus our starting point was a Frequency Offset of +450MHz on the graphics memory and +100MHz Offset for the GPU. We also enabled GPU-Z sensor monitoring as before to verify in-benchmark clock frequencies.

With the above configuration we managed to score 6,617 marks in 3DMark Time Spy. Once verified and submitted to HWBOT we now found that we were 24th in the GTX 1070 rankings.

Trying to improve the scores even further, we ran into a few issues. After raising the memory frequency to +500MHZ (2,250MHz) we found that the benchmark crashed during part II of the test. Clearly an unstable configuration. We then attempted to increase performance via the GPU clock. At a +225MHz Offset we found that the Time Spy benchmark was again unstable after about 45 seconds.

In our final attempt at simultaneous GPU and Graphics memory overclocking, we pushed both by just half a step. This time the benchmark was stable enough to complete a run, resulting in the best score so far – 6,648 marks. Once submitted and verified, we found that we now ranked 22nd in the GTX 1070 rankings on HWBOT.

This concludes our Overclocking adventure with the GALAX Hall of Fame 1070 GTX graphics card. As many overclockers have reported, Nvidia Pascal architecture GPUs do indeed have limitations as to just how much additional performance can be raised beyond stock settings, a fact that can hinder the potential for OC fun. This is underlined by the fact that companies like GALAX have already done a great deal to max-out performance in the factory. Regardless, there is always room for improvement by getting down to some manual testing and overclocking.

As you can see from the chart above, the largest performance gain was in the 3DMark Fire Strike Ultra benchmark where our manual overclock resulted in a 23% improvement. This is a 4K resolution, DX11 benchmark. In DX9 benchmarks using lower resolutions, significantly less performance is gained.

Thanks for joining us for SkatterBencher#7. Make sure you check out our YouTube channel where you will find many more video guides that show you how to get the most out of your system with the minimum amount of fuss.